The primary goal of my research program is to investigate environmental adaptations (both mechanistic and evolutionary) in relation to gas-exchange, acid-base balance and ion regulation in fish, integrating responses from the molecular, cellular and organismal level. The ultimate goal is to understand how evolutionary pressures have shaped physiological systems among vertebrates and to determine the degree to which physiological systems can adapt/acclimate to natural and anthropogenic environmental changes. This information is crucial for basic biology and understanding the diversity of biological systems, but much of my research conducted to date can also be applied to issues of aquaculture, toxicology and water quality criteria development, as well as fisheries management. The following are areas of current research interest in the lab:

Interaction between O2 and CO2 exchange in fish

Gas exchange is crucial to all vertebrates, and haemoglobin (Hb) plays a vital role in the transport of both O2 and CO2, which has been intensively studied for over a century. In conjunction with others, my work has demonstrated that Hb is modified in advanced bony fishes (teleost fishes, which represent about 50% of all vertebrates) relative to other vertebrates, significantly altering the pattern of both O2 and CO2 transport and exchange in fish. At all levels, from the amino acid sequence of Hb, to in vitro characteristics of the blood, to in vivo whole animal studies, my research has led to the hypothesis that there is a tight interaction between O2 and CO2 exchange in teleost fish due to a large non-linear Bohr/Haldane effect in conjunction with a low buffer value. The ubiquity of the large, non-linear Bohr/Haldane in conjunction with a low buffer value in fishes, and the implications of these phenomena on gas exchange and acid-base balance are being investigated. Current projects focus upon the Root effect and other haemoglobin characteristics of primitive fishes, and the role of the Root effect in facilitating O2 delivery to tissues in general, rather than specifically to the eye and swimbladder in fish, and the fine-tuning of buoyancy control in rockfishes. These data will shed insight into the evolutionary origin of Hb traits and will provide valuable information on structure:function relationships in Hb, one of the most intensively studied proteins of all times.

All vertebrates regulate pH of body fluids, to maintain protein charge, enzyme function and metabolism. Acid-base regulation is one of the most tightly regulated physiological systems. When water breathing fish are exposed to elevated water CO2 tensions (hypercapnia), plasma pH falls but recovers within 24-72 h, predominantly through processes at the gills. In a study on an air-breathing catfish, Liposarcus pardalis, we observed a reduction in plasma pH of up to 1 unit during exposure to CO2, with no compensation over the following 96 h, yet all fish survived. L. pardalis has a remarkable ability to regulate the intracellular pH (pHi) of tissues such as the heart, liver and white muscle. The preferential regulation of pHi in the face of a large plasma acidosis has been observed in a few other vertebrates, such as another air-breathing fish, Synbranchus marmoratus, and the salamander, as well as the white sturgeon. We hypothesize that this preferential pHi regulation is associated with CO2 tolerance and may be an exaptation for air-breathing in fishes.

Evolution of Air-breathing in Fishes

We are interested in the relative role of the gills and the kidney in the transition from water to air-breathing in fishes. Fishes of the Amazon, specifically the obligate air- breather, Arapaima gigas, and the closely related obligate water-breathing fish, arowana (Osteoglossum bicirrhosum) are being used to investigate this phenomena through collaborations with Drs. Adalberto and Vera Val at the National Institute of Research for the Amazon, Manaus, Brazil.

We are interested in the ontogeny of gas exchange, acid-base balance and ion-regulation in developing fish embryos and fry, and the role of the gills during development. We have recently been conducting studies that challenge the long-held assumption that teleost gills develop initially for gas exchange. By simultaneously measuring unidirectional ion and O2 uptake across the gills we have demonstrated that the gills are required for ionoregulation prior to gas exchange in early in development in rainbow trout. Thus, the gills assume a dominant role in ionoregulation before gas exchange, suggesting that ionoregulation may be the initial driving force for gill development. Additional studies will be conducted to determine whether this pattern is consistent with other teleosts and more basal fishes during early development which may alter our understanding of the evolution of gill function.

Due to both natural and anthropogenic processes, there are a large number of saline lakes, many of which are currently experiencing changes in salinity. Although a great deal is known about the specific mechanisms associated with ionoregulation in fish, much less is known about how changing environmental conditions (salinity, temperature, oxygen) influence salinity tolerance. We have been investigating i) the exceptional salinity tolerance of the ‘California’ Mozambique tilapia that resides in the dramatically changing environment of the Salton Sea, ii) the salinity tolerance of the endangered Lake Qinghai carp experiencing human induced salinity changes. Studies to determine salinity thresholds have allowed us to recommend upper salinity limits for the fishery. 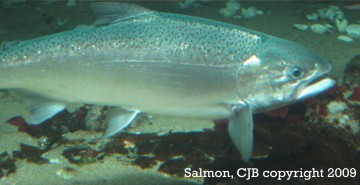 Land-based recirculating aquaculture systems (RAS) provides the opportunity to rear fish in a controlled environment. Although conditions for adequate growth are reasonably well described, conditions for optimal growth are largely unknown. Defining the truly optimal conditions that maximize growth, welfare, quality and cost-efficiencies in RAS is crucial for a sustainable and economically-feasible RAS industry. InSEAS (Initiative for the Study of the Environment and its Aquatic Systems) is a newly constructed, aquatic research facility poised to define the optimal conditions for rearing salmon in RAS. We are currently investigating the effect of salinity, temperature, and photoperiod on growth performance, physiological robustness, and welfare of Atlantic salmon, a common aquaculture species in North America, and coho salmon, a BC native fish that is increasingly being considered as a cultured species.

In Canada, 60% of electricity generation is from hydroelectric sources. British Columbia in particular has several large watersheds that have been subject to hydropower development, with other large projects under consideration. Two particular issues that have arisen are fish entrainment risks (ENT) and elevation of total dissolved gasses (TDG) downstream of dams and their consequences for fish. We are investigating TDG thresholds in rainbow trout as well as other salmonid species resident to those systems. We are specifically interested in the potential for both depth and behavioral compensation.